The huge rise in prices for detached houses on Vancouver's Westside from 2009 to 2012 created the largest premium in price per square foot for houses relative to other home types in recent history. 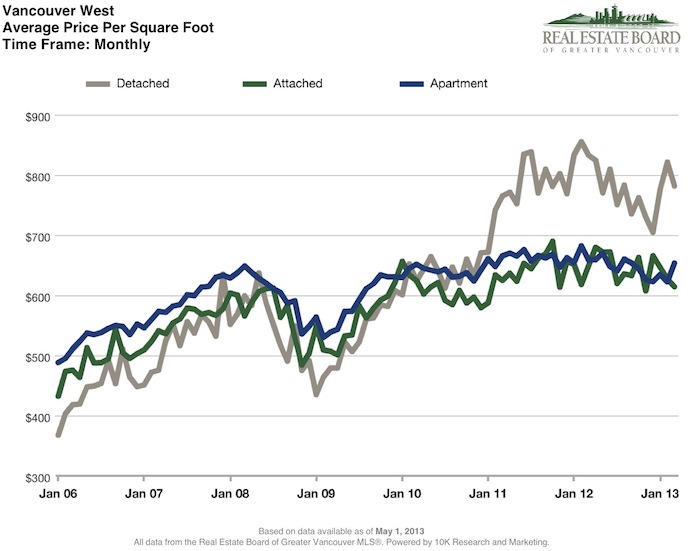 If you're living in a detached Westside house there has never been a better time to downsize.  Even if you don't want to "downsize" you could be living in exactly the same square footage as your detached home but pay more than 100/sq.ft. less for the space.  It means that you'll be less exposed to falling home prices.  For many it also means that they will be trading in an old "character" house with all its plumbing and electrical concerns for a newer modern home.  Talk about win-win.

Timing will be important though.  Westside Months of Inventory (MOI) turned upwards in April, likely signaling the crest for sales volumes this spring.  If the MOI follows the pattern of 2012, then we will see it rise again to a new high point late in the year.  Last year the MOI figures bounced up to high points not seen since the credit crisis - to over 14 months for detached homes.  Attached homes enjoyed the lowest MOI in April at 4.89 months while Detached and Apartments weere both back over 6 months. 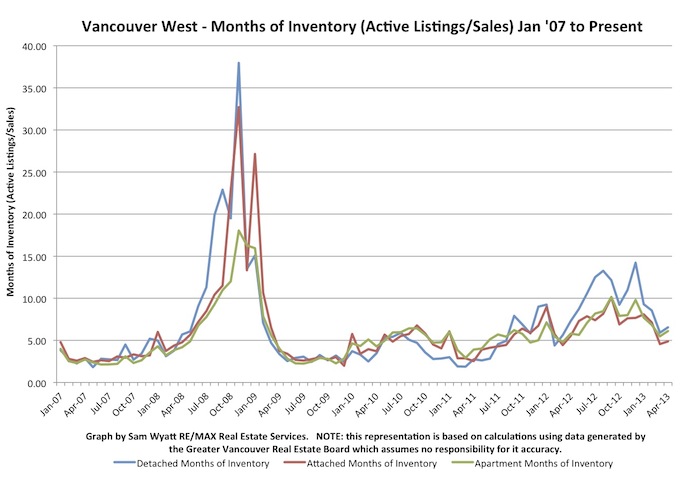 A rising MOI will likely mean that May will be the last really good month this year to sell a home so list the house now and look for the 1/2 duplex, tomehome or apartment once you've got a firm offer.  If MOI numbers do increase like last year then prices are almost certain to continue their decline and the hardest hit will continue to be detached homes 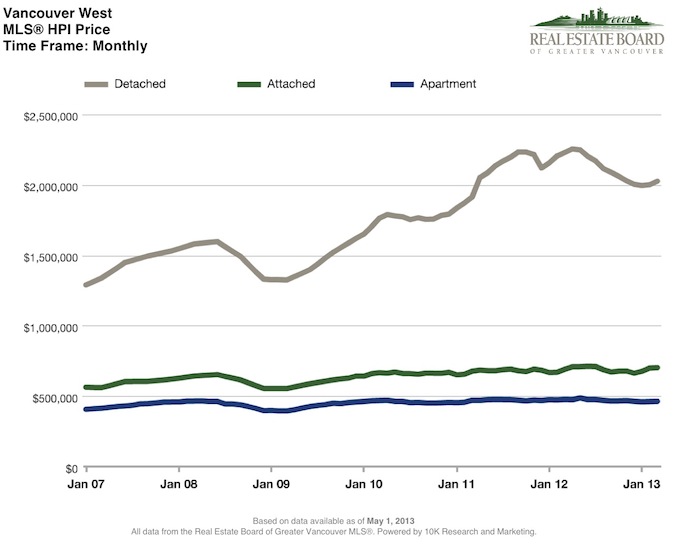 MOI was up in April due to a decline in sales volumes and an increase in active listings.  In itself this is not worrying but rather a seasonal reality.  The trouble is that if March's 324 Westside house sales are the high point for the year, then they will represent a 20% decline compared to 2012's 402 sales and nearly a 50% decline compared to 2009's 627 sales.  The trend since the run-up after the credit crisis has been declining sales volumes in which both the high and low seasons (Spring and Winter) have generally seen progressively fewer sales each year. 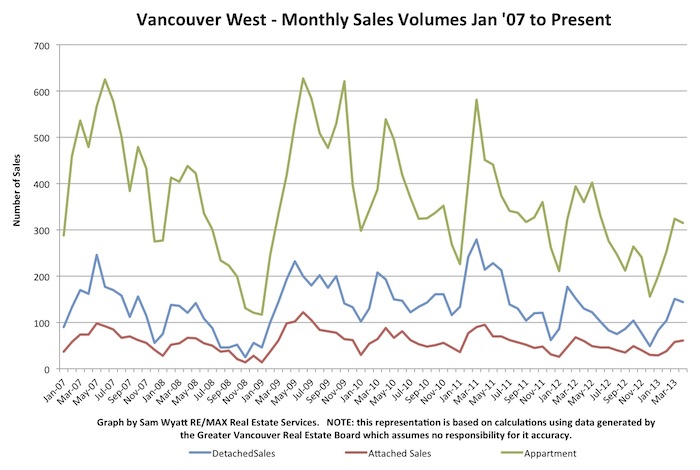 Inversely to sales volumes, active listings' low and high points have been, for the most part, increasing progressively each year. 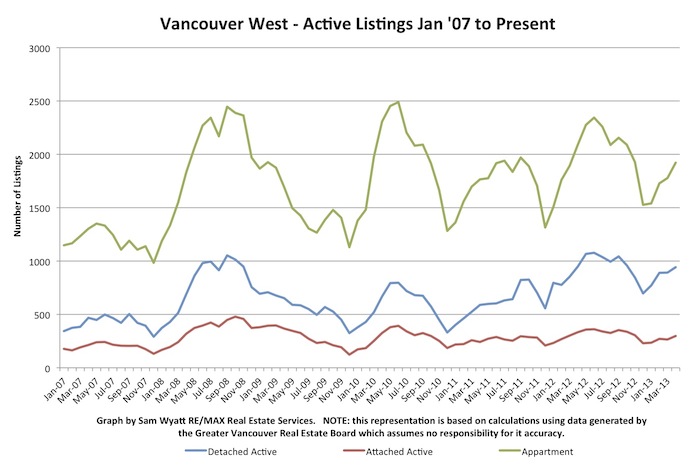 The increasing MOI is reminiscent of last year's buoyant spring market which was followed by a very slow rest of the year and falling prices.  Unfortunately, 2013 looks, for now, like it will continue the trend.  Continue to expect prices to fall - particularly on detached homes.

SELLERS:  There has not been such a great opportunity to downsize in recent history.  DO NOT HESITATE TO CALL ME FOR A PROPERTY EVALUATION.

BUYERS:  Active listing volumes have stayed high and are starting to rise again.  with the great interest rates available, it is a nice time to be shopping for a home.

I am presently selling ALDER CROSSING and THE WESTERLY two boutique developments in Fairview Slopes and West Kitsilano respectively.  Pricing is sharp.  At Alder Crossing Investor's Studio apartments start at $239,900 and two bedroom and den townhomes with 250 sq.ft. roof decks are priced at $769,900.  At The Westerly one bedrooms start at $319,900 and 2 bedrooms start at $469,900.  The best part is that HST does NOT apply.  THE WESTERLY display suite is closing May 6th to start construction so don't delay in coming in to see it.

THIS ENTRY WAS POSTED ON May 1st, 2013 BY Sam Wyatt Personal Real Estate Corporation | POSTED IN Vancouver Real Estate Statistics