Months of Inventory (MOI) for Vancouver West real estate dropped below 5 months for all home types in February. 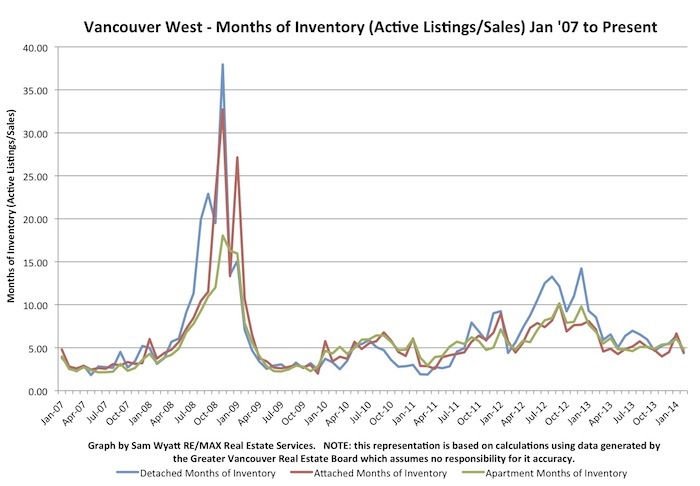 December, January and February have all been good months for Vancouver Westside sales.  These winter months are generally times when active listing volumes are at their annual low points.  The result has been a tight market for the start of 2014.  Will it continue?

The dominant news in real estate over the last couple of weeks has been the Federal Government's elimination of the "investor" immigration program.  Part of that announcement included the elimination of about 65,000 backlogged applications in process.  The question people are asking is: will this affect real estate prices in Vancouver?  The simple answer is yes.  If nothing else, foreign nationals who have purchased homes in anticipation of their applications being processed may rethink their plans and sell their property.  In addition, new prospective foreign buyers will be scared off by the lack of an easy avenue to immigrate by.  Sales of new condominiums at UBC (a hot bed of Chinese foreign buyers) have already fallen off.  The more detailed answer is that in the longer run it may not change much.  We are still waiting to find out if the Federal Government will refuse to allow provinces to use their Provincial Nominee Programs to bring in "investors" in.  For now, the provinces have reached their quotas and we will have to wait to see what the Federal Government is willing to allow going forward.  I believe that it is likely that we will ultimately see some sort of investor program resurface via the Provincial Nominee Programs.  Remember also that many of the so called "investors" have been very wealthy and buying up Westside detached homes.  Between January 2009 and January 2012, the average sale price of a Westside detached home went from a little less than $1.3m to nearly $2.5m.  Contrast that to the much smaller change in condo prices. In January 2009 average sale price of a Westside condo went from about $450k to $640k in January 2012. 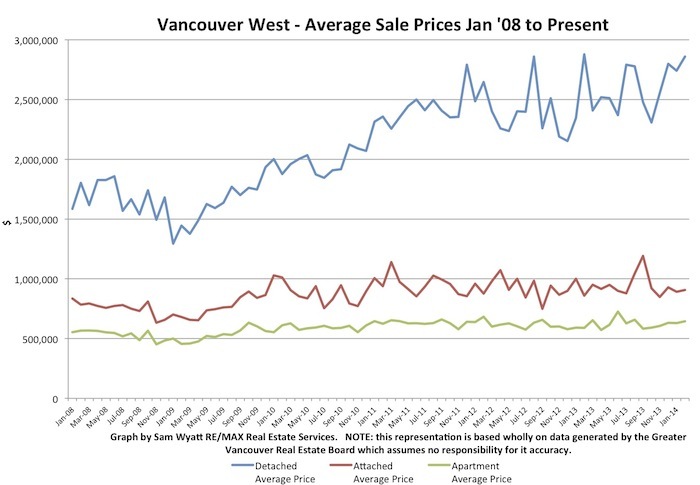 If you bore into individual sales you find that the highest priced real estate went way up while the lowest priced real estate barely moved.  The addition of all that foreign capital in the high end of the market didn't have much of an effect on the bottom of the price ladder.  The removal of that inflow of money will likely have a disporportionate effect on higher priced detached homes than on lower cost condos.

Interest rates may be another coming factor.   Many believe that the Federal Reserve (Fed) will continue to taper its monthly money "printing" or "quantitative easing" to $55 billion at its upcoming March 18-19th meeting.  It had been buying $85b in bonds monthly since the spring of 2013 until December 2013 when they began the tapering plan.  The Federal Reserve intends to continue to reduce its purchases by 10 billion a month until late this year when the program is supposed to come to an end.  One of the effects of this stimulus is to suppress interest rates.  It will be interesting to see how high interest rates will rise as the taps are slowly closed.  I anticipate that we will see 5yr fixed mortgage rates go up another 1%.

I sold all of my Vancouver real estate holdings and presently rent.  The reason is simple - it costs a lot less!  The Canadian Housing and Mortgage Corporation recently released its 2013 Rental Market Report and it illustrates that very point - it is significantly less costly to rent than purchase a home on the westside of Vancouver.  Don't get me wrong, there are plenty of reasons why buying a home in Vancouver makes more sense then renting but for now, the cost is not one of them. The most important thing to remember is that the longer you plan to hold your property the more likely it will pay off.

If you are an investor and want to buy cash flowing properties with minimal down payments then the question about where to buy is far more significant.  The answer is:  go where things are growing.  I have purchased several revenue properties in Fort St. John BC and have and continue to help clients do the same.  Fort St. John is in the heart of one of the largest natural gas deposits in North America.  You may recall Premier Christy Clark's election promise to promote BC's natural gas industry - it won her the election.  Properties in Fort St. John are cash flowing beautifully with projected annualized returns of about 20% based on a 5 year hold.  If you are interested in exploring the investment opportunities in Fort Saint John, give me a call and we can get started.