Months of Inventory at Nearly 8 Months!!

The Months of Inventory for detached homes on the Westside of Vancouver jumped from 4.95 months in August to 7.91 for the month of September.  The MOI has not been this high since February 2009 when the market was just recovering from the 2008 credit crisis.  From June 2008 through February 2009 the MOI for Westside detached homes was over 8 months and at the high point it nearly hit 40 months.  Average prices dropped from their 2008 pre-crisis high of $1,858,267 to $1,294,341 in February 2009 - about a 30% drop.  Lower pricing and record low interest rates fueled a surge in first time buyers entering the market in 2009.  By 2010 a wave of Chinese buying in the Westside detached market buoyed up the average price to its current high point of $2,499,927 in June 2011.

About a year ago inventory numbers for all markets were trending up and I said then that I expected the market to fall.  I was wrong.  The huge influx of Chinese buyers drove down detached inventories and drove up prices.  I believe that I was premature in my projection.  Looking at the MOI numbers now, they are in worse shape then last year and the global market news is bad - nearly as bad as 2008 and some would argue worse.  A new market drop could conceivably put pricing back as low as the February 2009 numbers.

I would not bet against these numbers and economic news.  If you have been thinking of selling don't wait a day to call me.  For those of you who have just sold property - well done.  For those who are looking to buy - the market may finally be with you. 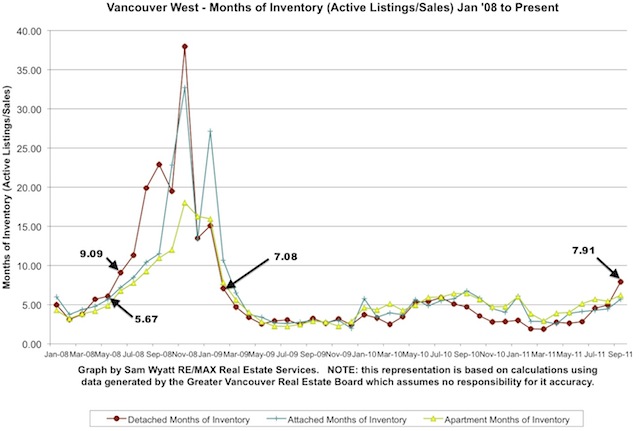 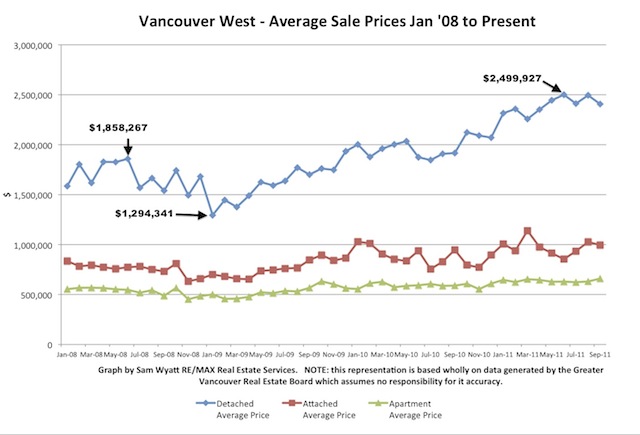