Months of Inventory (MOI) for Vancouver West real estate continued to hover around five months for all home types in March and April.  Apartments were the lowest, at only 3.98 months! 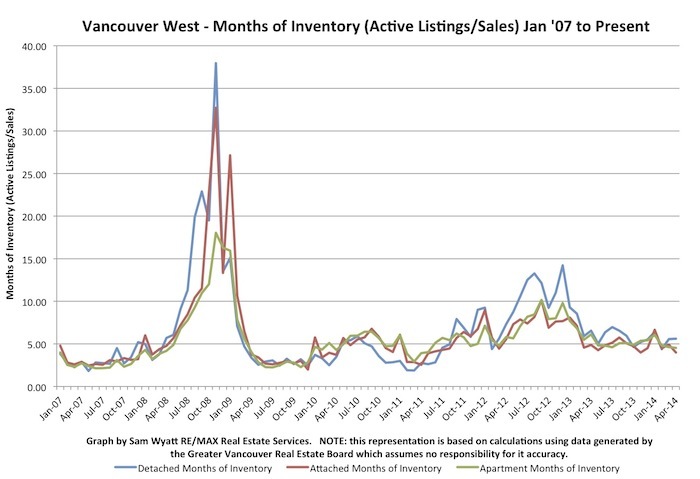 It has been a busy spring market with both a rise in active listings and sales volumes.  Anecdotally, my last two listings sold within a few days.  One sold for over asking in a multiple offer and the other for full price.  By all measures the Vancouver Real Estate market is busy. 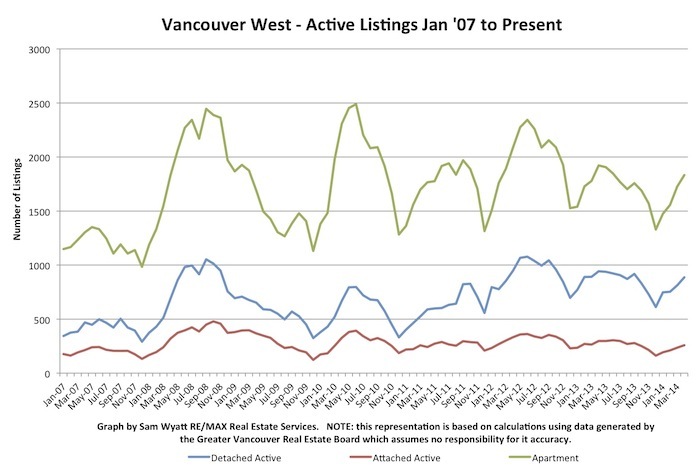 The brisk market is part of the typical cycle in which the spring market has an increase in both active listings and sales volumes.  In spite of a hot market, sales volumes are no where near the highs of 2009-2011. 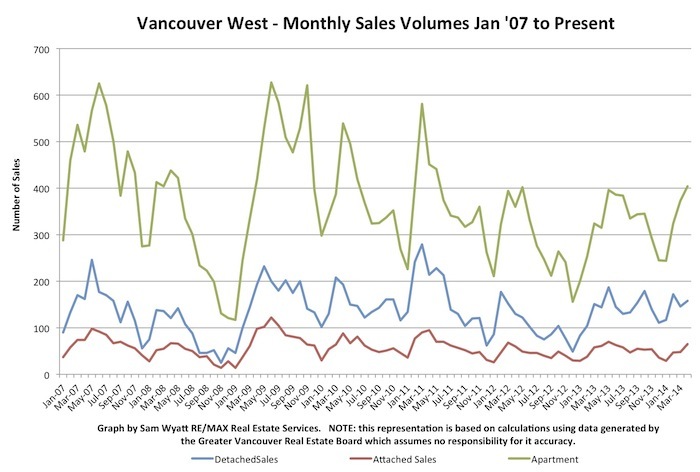 One of the magnifying factors has been a return to sub 3% five year fixed interest rates.  Interest rates dropped to 2.69% for a five year fixed rate last spring (2013) and jumped back up to about 3.5% last summer after the US Federal Reserve (Fed) chairman announced that they would stop their expansion of the money supply through bond buybacks.  The sharp change in the bond market that followed persuaded the Fed not to discontinue the bond buying program but rather to taper the $85 billion a month program by $10 billion a month. The Fed has continued to reduce its monthly money "printing" or "quantitative easing" down to $45 billion for May.  They expect to wind the program down by October this year.   One of the effects of this stimulus has been to suppress interest rates.  It will be interesting to see how high interest rates may rise once the taps are fully closed later this year. 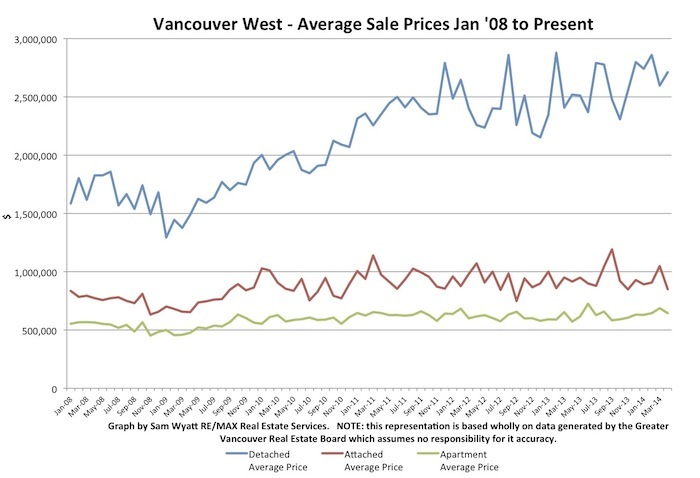 Since the startling rise of detached home prices between 2009 and 2011, average sale prices for westside houses have trended along the $2.5m mark.  Apartments and attached homes have been relatively stable since then as well.  In summary, the spring market is quite active but not nearly what it was in 2010 & 2011.

If you are an investor and want to buy cash flowing properties with minimal down payments there is precious little of interest in Vancouver.  I have purchased several revenue properties in Fort St. John, BC and continue to help clients do the same.  Fort St. John and the Peace River District are in the heart of one of the largest natural gas deposits in North America.  You may recall Premier Christy Clark's election promise to promote BC's natural gas industry - it won her the election.  Properties in Fort St. John are cash flowing beautifully with projected annualized returns of about 20% based on a 5 year hold.  If you are interested in exploring these investment opportunities, give me a call and we can get started.

THIS ENTRY WAS POSTED ON May 2nd, 2014 BY Sam Wyatt Personal Real Estate Corporation | POSTED IN Vancouver Real Estate Statistics