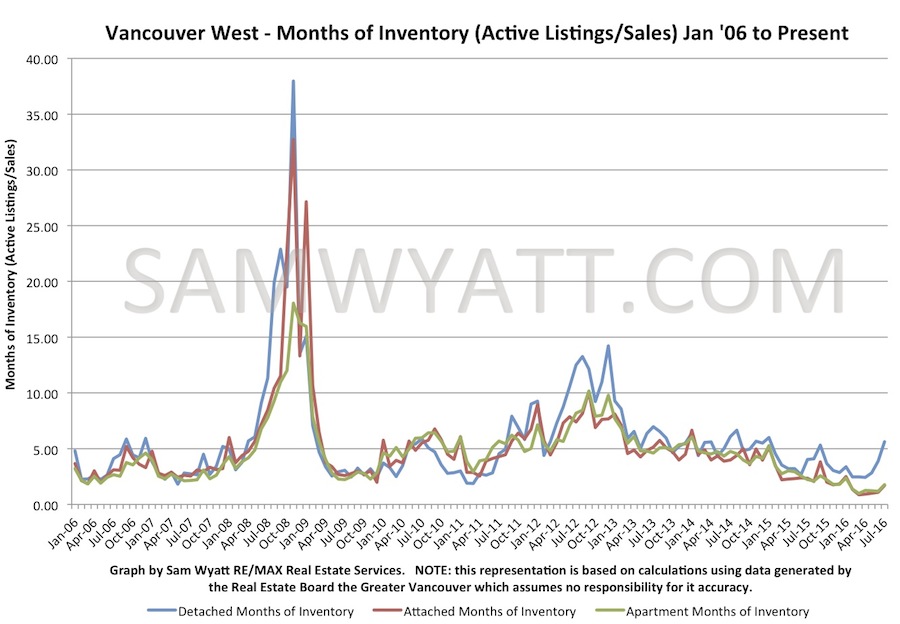 Months of Inventory has begun to climb, particularly of for detached housing and we are slowly moving out of an extremely frenetic market to a more typical hot market.  Apartments and attached homes on the Westside continue to have very low months of inventory.  Don't expect prices to fall significant anytime soon.

I have received countless requests for my opinion about what effect the various changes to the Property Transfer Tax (PTT) made this year will have so I will devote this market update to answering them.  My simple answer is that the changes were likely meant only to make the government appear to be doing something about house pricing in Vancouver.  One change is an appropriate step in the right direction but the other two PTT measures appear to be a give away to those who are likely funding election campaigns in one case and a sensational measure to divert attention from more effective policy options in the other.

In February 2016 the PTT rate for the fair market value of homes over $2,000,000 was increased to 3%.  In principle I like this move.  A progressive property transfer tax means that the more costly the home, the more steep the taxation on its purchase.  There should likely be another threshold over $5m at 4% and another over $10m at 5%.  The principle here is that the steep increase in taxation should help mitigate pricing.  In practice, because it is a one time tax, I doubt that it will be effective even in the case of more thresholds.  I would have been far more impressed with a progressive Property Surtax rather than a purchase tax - more to come on this later.

For me, the most egregious of the recent PTT changes is the exemption for new construction homes under $750,000 brought in February.  If there is a group {aside from fat cat realtors like me – Ha!} who are presently making their fortunes from the present real estate market it is developers.  If I "follow the money" it suggests there should have been some serious election campaign contributions from Vancouver developers because this PTT exemption looks like a pure give away to them.  The government's argument for the elimination of PTT for new construction is that it makes buying a new home more affordable.  The problem with this argument is that it ignores that real estate is effectively a market commodity.  People will pay what they are willing to pay, including taxes, whether there are taxes or not.  By eliminating the PTT on the sale of new homes, the BC government has simply padded developers’ margins who will always charge as much as they can (I do not begrudge them) - a little less than 2% more in this case.

The brand new 15% PTT on residential property purchased by foreign entities brought into effect on August 2nd is the sensational one.  15% is a large percentage and intended to impress, without actually altering the long-term market.  One probable and significant short-term problem with the new tax is that it does not grandfather existing contracts.  I expect that we will see some court challenges on this.  It is patently unjust to retroactively apply a tax that would certainly have affected the purchasing decision.  Consider again that the buyers paid as much as they were willing, inclusive of taxes, and are now suddenly saddled with a new tax.  The next problem with the tax is those who should pay it likely won't.  A simple dodge for this tax is for Canadian corporations to buy properties, pay standard PTT and then sell the shares of the corporation to foreign entities triggering no additional PTT at all.  Lawyers and entrepreneurial types have likely already set the wheels in motion on this.  With such a huge tax, the legal and remuneration costs will look quite reasonable.  One possible long-term distortion resulting from this tax is that foreign entities may shift purchases to agricultural and commercial property (which are exempt), making life harder for local farmers and businesses.  The more significant issue with the tax appears to be that very few entities, if any, are targeted by it in the first place.  One of the missing conversations about this tax is that many of the so-called "non-resident" owners are in fact residents.  There are countless examples of students and homemakers owning multi-million dollar homes for which they do not even have the income on paper to pay for the annual property taxes.  In many cases the students and homemakers in question are, in fact, residents of Canada.  The breadwinner of the family has, more often than not, designated themselves as a non-resident while their spouse or children hold title to the property as residents.  This means that no income tax is paid while the very wealthy family is entitled to all the benefits of residency in BC.  In a sense the BC government was right when they initially claimed that there isn't a foreign ownership problem - it is actually an income tax avoidance issue.  The effect of foreign money on the Vancouver market is more probably attributable to residents rather than non-residents and that is the problem with this tax, it does not target the money that is influencing the market but rather a very small group of people.  I suspect that it was a very conscious move to implement a tax that sounds impressive but does little.

That leaves us with the question: what would a better policy be?  I am a strong advocate of a progressive property surtax proposed by both Josh Gordon at the SFU School of Public Policy and Thomas Davidoff, Joshua Gottlieb and Tsur Somerville at UBC's Sauder School of Business.  The proposed tax specifically targets people who are not paying Canadian income tax but own costly homes in BC.  It would be levied as part of a BC Income Tax Return and payable to the provincial coffers.  income tax paid would be deductible against the surtax and there are a myriad of exemptions proposed (eg: retirees) to insure that the tax is properly targeted.  The beauty of this tax is that it targets foreign capital rather than foreigners.  A secondary benefit is that it targets tax evaders and avoiders.  Unlike cash, you can't "offshore" real property.  The proposed tax would raise significant revenue while simultaneously discouraging foreign ownership by raising the annual carrying costs.  The economists from UBC and SFU made the case to the Province and were roundly dismissed.  I can only speculate why a government could ignore prominent schools within the province's two most respected Universities and implement much lesser policies.  I am inclined to believe that they don't really want to solve the housing crisis at all.