The Months of Inventory (MOI) metric for all Westside Vancouver home types rose in December.  The Detached MOI rocketed to 9 months, Attached increased to 6.74 and Apartments to 5.02.   I was anticipating a drop in the MOI as many listings were pulled from the market for the holidays.  This has not been the case.

Although fewer new listings came to the market and many fell off the market, those drops in inventory could not hide the low relative volume of sales.   In December of 2009 133 westside detached homes were sold, in December of 2010 116 and in December of 2011 only 62.   Nine months of inventory is in the theoretical Buyer's market territory so if the coming months bring a glut of new listings then things could get a lot worse.  On the other hand sales volumes might reel in the slack.  We will need to watch and see what happens in the next couple of months.  For now, the trend towards higher inventories seems likely to continue.

Anecdotally, there is a real mixed bag of activity in the market.  All of my own listings sold in December save one which we pulled and will relist shortly.  Demand for entry level condos has been decent due to the relatively low increases in pricing compared to the detached market.  Comparatively good deals for leasehold detached properties have also attracted some activity.  Leasehold condos at UBC have been trading at virtually the same as if they where freehold while pre-paid leases (until 2074) on the Musqueam lands have sold for significantly less than their freehold counterparts.  Many listings have been languishing while sharply priced homes are still selling fast. 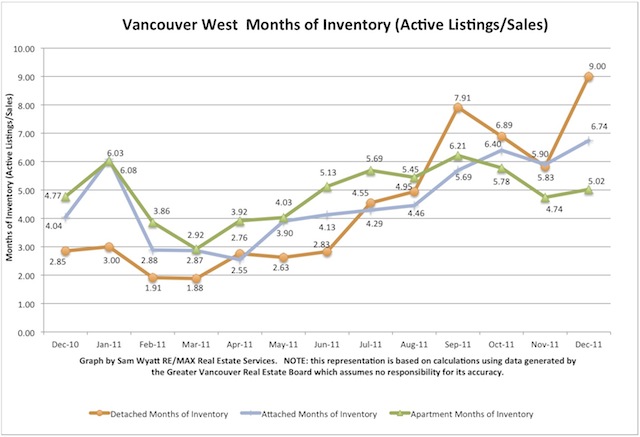 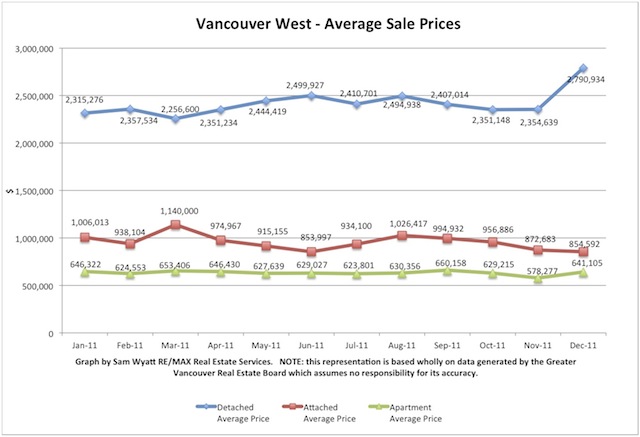